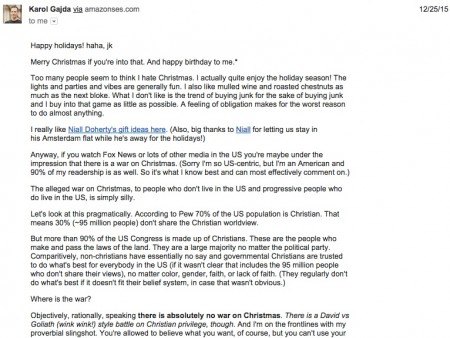 I saw “war on Christmas” type things one too many times last month and it prompted me to write the following e-mail. I scheduled it to be sent on Christmas Day, but backed out and deleted it from my e-mail software a few minutes before it was to be sent. I sent myself a copy before I did that so all is not lost. And I guess it’s kind of appropriate that I am posting this on Epiphany or Three Kings’ Day, one of many religious holidays where Poland shuts down. Don’t worry, I made channa masala yesterday so we won’t go hungry.

Here is that e-mail in its entirety, text unedited. (I’d really like to edit it, because I didn’t make my point as well as I’d have liked, but here it is. Additional text afterwards.)

Subject: happy xmas, war is over?

Merry Christmas if you’re into that. And happy birthday to me.*

Too many people seem to think I hate Christmas. I actually quite enjoy the holiday season! The lights and parties and vibes are generally fun. I also like mulled wine and roasted chestnuts as much as the next bloke. What I don’t like is the trend of buying junk for the sake of buying junk and I buy into that game as little as possible. A feeling of obligation makes for the worst reason to do almost anything.

I really like Niall Doherty’s gift ideas here. (Also, big thanks to Niall for letting us stay in his Amsterdam flat while he’s away for the holidays!)

Anyway, if you watch Fox News or lots of other media in the US you’re maybe under the impression that there is a war on Christmas. (Sorry I’m so US-centric, but I’m an American and 90% of my readership is as well. So it’s what I know best and can most effectively comment on.)

Let’s look at this pragmatically. According to Pew 70% of the US population is Christian. That means 30% (~95 million people) don’t share the Christian worldview.

But more than 90% of the US Congress is made up of Christians. These are the people who make and pass the laws of the land. They are a large majority no matter the political party. Comparitively, non-christians have essentially no say and governmental Christians are trusted to do what’s best for everybody in the US (if it wasn’t clear that includes the 95 million people who don’t share their views), no matter color, gender, faith, or lack of faith. (They regularly don’t do what’s best if it doesn’t fit their belief system, in case that wasn’t obvious.)

Where is the war?

Objectively, rationally, speaking there is absolutely no war on Christmas. There is a David vs Goliath (wink wink!) style battle on Christian privilege, though. And I’m on the frontlines with my proverbial slingshot. You’re allowed to believe what you want, of course, but you can’t use your beliefs to negatively — particularly un-Constitutionally — affect other people’s lives. If you think and act like you can you’re just not a nice person, are you? (Many would say you’re not Christ-like at all.)

The issue for me isn’t about being insensitive or that “people are too quick to be offended” like the majority privileged class tells themselves in their echo chambers. Ironically, that is mostly stated by people who are offended when their own beliefs and privileges are questioned.

And so, the war on Christmas is really just people getting upset that they’re barely — just barely — starting to lose their unwarranted privileges.

Let’s look at some other ways the war on Christmas is made up and “Happy Holidays” is the correct way to be:

1) Do you wish anybody a happy birthday for weeks leading up to their birthday? Probably not. Because it would be silly. So you wish them a happy birthday on their … wait for it … birthday! Since Christmas is exactly one day (or two, if you’d like) isn’t it silly to say Merry Christmas on days that are not Christmas? Rhetorical question, but the answer is yes, yes it is silly.

Isn’t it easier to lump all these ideas together during the long December holiday season and just say, “Happy Holidays!”

Isn’t it more kind to be inclusive instead of divisive?

Isn’t it more fun to make people feel good and wanted and respected instead of reminding them that you’re the majority and they’re the minority and your life enjoys extra privileges?

As information spreads, as education evolves, and as technology advances I prefer to be on the correct side of history as best I can. What about you?

My Favorites of 2015 post is almost ready for Monday (Dec 28) so watch for that.

P.S. I’ve been reading the Qur’an this month. I felt it was time to study something other than Christianity for a while. Muslims and Christians worship the same god so I guess it’s not a huge stretch, though.

I probably should have defined “war on Christmas” in that e-mail. In traditional and social media it’s presented as both a war on the word “Christmas” and also a war against Christianity. But no matter how you define this alleged war it’s not the reality we live in.

So why didn’t I send it?

First, I didn’t want to deal with the possible backlash while my wife and I were on vacation. I did a good job of not being angry or attacking, and using the facts and reality, but it’s easy to misrepresent words when they’re not what you want to see or hear. Especially if you feel you’re being put on ideological defensive. Which I also tried to make sure I didn’t do. Although, on further reflection, the David vs Goliath and birthday parts possibly fail that.

Second, there’s the issue of most of my friends and family — dozens of whom read my site and e-mails (hi, y’all) — being some denomination of Christian and I didn’t want to put even a small damper in their Christmas Day festivities. I was actually thinking, “nah, they won’t be checking e-mail on Christmas Day, will they?” Then I remembered the times we live in. So, while an e-mail — now a blog post — like this isn’t as effective when it’s sent in January, I think it’s still effective enough.

Interesting, isn’t it? That I feel the need to censor myself and hold back? Even right now I’m nervous about publishing this publicly. If you’re religious do you hold back from sharing your views with anybody and everybody in your day-to-day and via blog, facebook, twitter, instagram, pinterest, or whatever else? From my point of view, my various feeds, TV and other media, politics, and being out and about in everyday life the religious are quite loud and open with their religion.

Maybe that’s a small insight into how privileged you are that you don’t have to think about holding back. You’re protected from being labeled as “angry” or “immoral” or “satan worshipper” or “annoying” or “insufferable” or “hateful” or “a know-it-all” (all things I’ve had directed towards me) simply because you were taught to believe something that man made up a few thousand years ago.

But it brings me to today’s Bible study. Matthew 6:

Verse 1: Be careful not to practice your righteousness in front of others to be seen by them. If you do, you will have no reward from your Father in heaven.

Verse 5: And when you pray, do not be like the hypocrites, for they love to pray standing in the synagogues and on the street corners to be seen by others. Truly I tell you, they have received their reward in full.

It often pains me when I have to share Bible verses to followers of the Bible because of how it comes across, but there it is. Some will try to point out that I’m cherry-picking. It’s a bad argument anyway, but specifically in this case since Matthew 6 also includes the ever-popular Lord’s Prayer (Verses 9-13). So if that’s on your prayer list — it was repeated every time I went to church as a youngster and we had to repeat it multiple times after confessional — you’re cherry-picking as well, and from the same chapter as me. So is the whole chapter useless or just the part that is inconvenient in your life?

So, again, is this a war on Christmas or a battle against Christian privilege (and hypocrisy)?

There are currently Christian churches on nearly every street corner in America. To be less vague: according to the National Congregations Study by Mark Chaves at the University of Arizona there were an estimated 331,000 Christian churches (all denominations) in the US in the year 2000.

There is a lot of power (and tax savings) in those churches. Far more power than any other religion and far more power than non-believers hold. And that’s a lot of choice as to where to congregate. You can literally plop down in any town in America and find a place to “talk” to your god with others. Is that a war on Christmas? The fact that you can go into any town in America and practice your religion with others who share your views? Absolutely any way you define freedom you’ve got it. If you’ve got freedom like that it’s intellectually dishonest to also claim you’re in the midst of some kind of war.

What would happen if there were 331,000 “Centers for Atheism” (there’s no such thing, of course) in America? How would that make you feel? Would it feel aggressive to you that “atheists have to be so loud and open about it”? That’s a common complaint when we do anything — usually simply call out your privilege — in public.

One of the somewhat infuriating aspects of this is that I will fight for your rights to be who you are no matter what you believe even if I don’t get that in return.

If you want to pray in public and you want to go against your god and the Bible (remember Matthew 6?), cool, do it. If you want to shout from the rooftops that “GOD IS GRRRREEEEEAAATTT!!” then I support your right to do so. If you want your child(ren) to follow their specific religion while at a public school, on their own or with friends, that’s all fine. If you want to go on TV and lie about a war on Christmas you’re an idiot, but I’m still going to fight for your right to be able to do so. Or if you want to protest abortion because your ancient text written by men (always men, never women) who are less intelligent than today’s 15 year olds allegedly told you so or because you don’t understand 7th grade biology (fine, 9th grade biology) then please continue. You are allowed to be wrong in public if it doesn’t take other’s rights away. This could go on for days so that’s a whole different essay. (Thesis: you’re causing more harm than good. For another day.)

The problems stem from using your religious beliefs to influence public policy, and therefore the rights of others who aren’t specifically like you.

Sadly, all of these currently do happen with regularity, even though they are inherently wrong and specifically un-Constitutional.

We’re at 2,000+ words and I think I’ve expounded on that original e-mail enough for now. But I’d truly like to know, do you still think there is a war on Christmas or Christianity?

I’ll probably continue most of this discussion via the e-mail list. Subscribe via the bar at the top of this page if you’re not already on the list.

Comments are disabled on this post. Have a response? Post it to your blog. Am I missing something that makes me look like an idiot? Have I been factually incorrect somewhere? E-mail me and I will edit. (I’ll make note of edits, if any, below.)