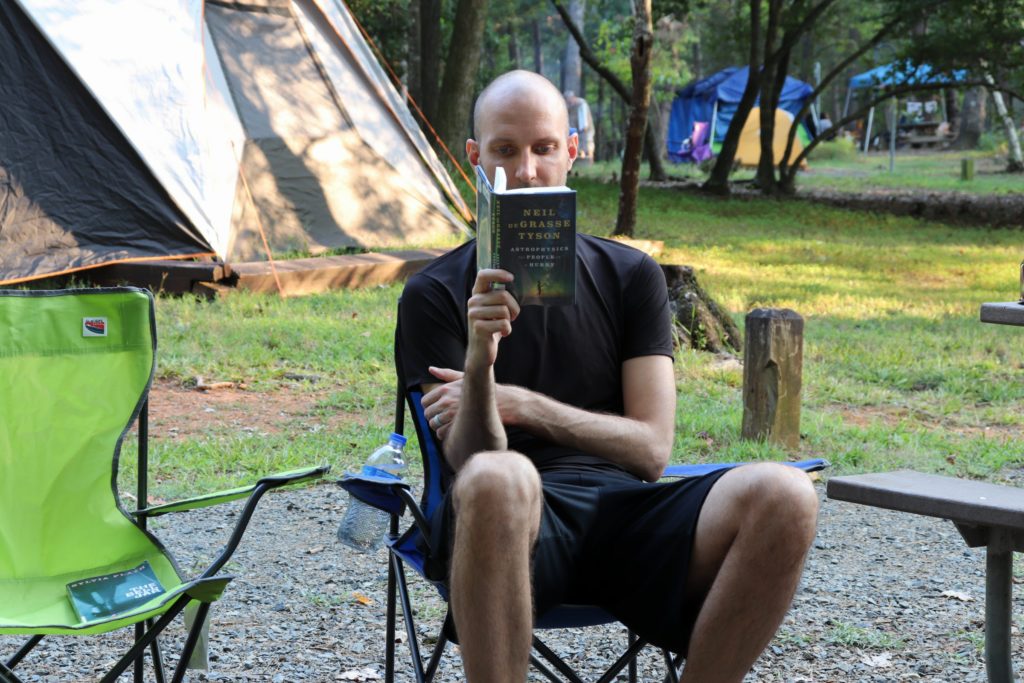 Since moving back to the US my wife and I have gone camping more than either of us had camped in the previous spans of our lifetimes. (Well, maybe not quite, but it sounds better like that, doesn’t it? I think I’d gone camping 5 or 6 times prior to July 2016 and have gone 4 times since then.)

I did not grow up in what I would consider an “outdoorsy” family by any stretch of the imagination, but the first vacation that I can recall was a camping vacation. I think that was probably due to budget more than any kind of love of the outdoors. (We’ll get to that, but it’s actually a great reason to go camping.) By the age of 13 or so my parents bought a small vacation cottage and I stopped going camping altogether until my late 20s.

As I got older camping wasn’t on my radar as a form of travel or recreation. I didn’t have friends who camped (or even traveled much at all) and I thought it was for a different kind of person. Not for me, anyway. When I was about 20 or so I remember hearing about a couple I knew who went camping for their honeymoon and thinking, “ugh, why would anybody do that?!” Now I think it’s probably a more fun and memorable honeymoon than most people have and I love hearing about people doing “alternative” honeymoons (or weddings, for that matter).

I think part of my feelings about camping stemmed from a feeling of intimidation. I grew up on, and relied on, TV, the internet and easy access to clean water and flush toilets. I didn’t like hardship. The outdoors? Camping? You mean to tell me I need to start a fire and make food on the ground, on a tree stump, or on a picnic table? And I have to spend all day outside? After I’m done being outside for every waking moment I get to sleep inside a box made of fabric instead of in my comfortable bed in my heated/air-conditioned home? Oh, ok, you’ve gone off the rails, no thank you.

It wasn’t until I joined CouchSurfing back in 2007 (I’m no longer a member) and I met a bunch of fun, adventurous folks that I learned I actually like camping. On my first CouchSurfing camp trip we packed 10 people in 3 canoes for a 3-day trip down the Withlacoochee River. We camped a little too close for comfort to alligators. I got bitten by a few ticks. (I don’t recommend.) There was nowhere to shower or wash (I was too afraid to swim with the gators; others weren’t!). But it was a great time and I went on another camping trip with the same group a year later.

That was what you might call wild or backcountry camping. Find a spot somewhere on BLM or park land that’s big enough for tents and make camp. The fun part of wild camping is that you’re completely on your own. You won’t spot other people because you won’t be near a campground or civilization. No facilities except what you bring with you. You ever dig a hole and poop in the woods? It really makes you feel alive. Like you can do anything. That all is maybe also the not-so-fun part of wild camping. No judgment if you feel like that because I’m still too intimidated to wild camp on my own. Although I promise wild camping is actually a good time I prefer a little more luxury.

Anyway, as much fun as I learned that camping could be I stopped going camping because in 2009 I got rid of almost everything and began traveling with just a small backpack.

But then, as mentioned, my wife and I moved to the US last year.

Within a week of arriving in the US we went on a camping trip to Sleeping Bear Dunes in northern Michigan and I remembered, “oh, right, camping is a fun travel option.” A couple months later, instead of staying at one of the expensive hotels near Niagara Falls, we camped at Niagara Falls State Park for 4 nights. (It’s nearly 20 miles north of the falls, but it’s a beautiful park. Would stay again.) On the way back from Niagara we camped at a small state park in Ohio on the banks of Lake Erie.

Since moving to North Carolina we’d been planning on camping because there are so many nice places within a 2-4 hour drive, but I didn’t get around to buying a tent until 3 weeks ago. (Every camping trip previous to moving to NC was with borrowed gear.) Since then we’ve camped at Carolina Beach State Park and Morrow Mountain State Park.

All that to say I’m not some kind of outdoorsman and I barely know what I’m doing. Thankfully, there is really not all that much to know.

Also, I think it’s more useful to learn from other beginners for something like this because experts are too, here’s that word again, intimidating. Bear Grylls seems like a cool guy and all, and I’m impressed as anybody that he could drink his own piss without vomiting, but he’s so far out of my element that I wouldn’t learn anything watching him.

Also, an expert is probably going to recommend a lot of stuff you don’t need.

Interestingly, you probably already have most of what you need to go camping! And the stuff you don’t have will cost under $250. Maybe a lot less, depending on how you shop and what you want. Think of it like this: for the cost of one or two nights in a hotel you can buy all the gear you’ll need for camping for at least the next few years. Assuming you take care of your gear you’ve probably got a decade of use ahead of you.

But before we get to all that, I haven’t made the case for just why I like camping so much.

Why camping is joyful

There is surely more good stuff about camping that I haven’t thought of, but let’s move on to …

The Beginner’s Guide To Tent Camping!

As I mentioned earlier, you already probably have most of what you need to go camping, because you don’t need much to have a good time. I’ll split this up into necessities and nice-to-haves. I’ll also mention what we have, plan to have, or would like to have. (Amazon affiliate links where relevant.) And, of course, I’ll show you how easy it is to find and book campsites.

Necessities You May Not Have Yet 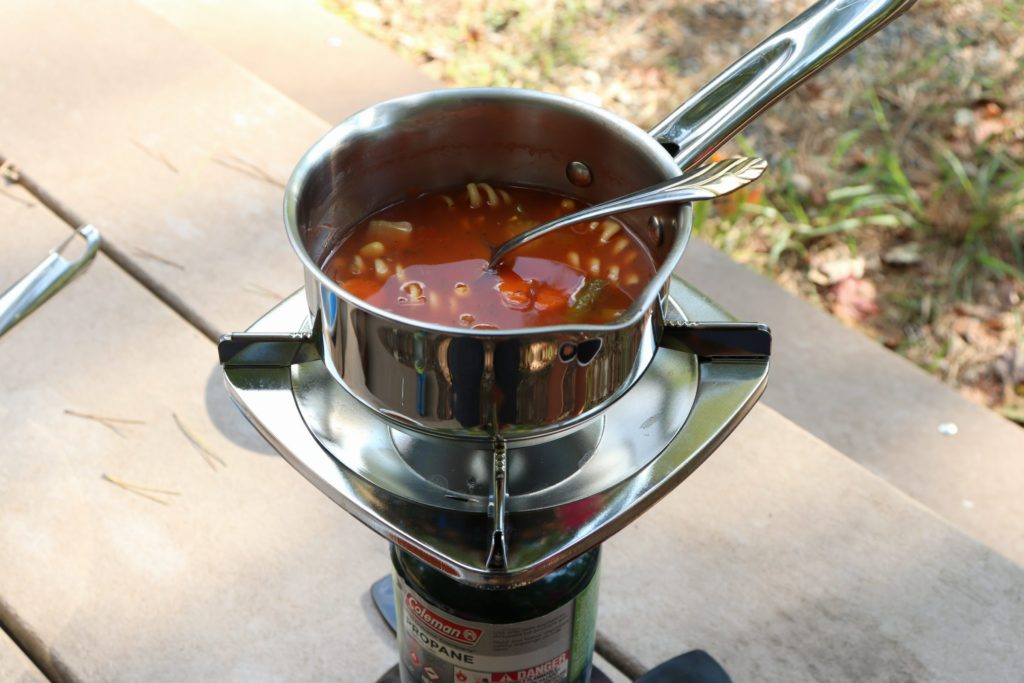 That’s about it for things you probably need to buy! All told, less than $200.

Necessities You May Already Have

You might not have all of this stuff, but I wouldn’t be surprised if you have most of it.

Nice To Have, But Not Necessary

The reality is there are a lot of nice-to-haves so I’ll stop there. You can make camping as rustic or luxurious as you like. I like it somewhere in the middle.

“Wait, that’s all well and good, Karol, but where do I find/book campgrounds?”

If you’re looking for something close then Google “state park near me” and “national park near me” to find the closest of those near you. Or just scroll around on Google Maps until you find big spots of green. That’s probably a state or national park.

You don’t need to book campsites ahead of time, but if you’re planning on camping during a national holiday it’ll be your best bet. Campgrounds fill up fast during holidays.

I’d also suggest heading to your local library and picking up a book on tent camping and/or hiking trails in your state. Here in North Carolina I’ve made use of The Best In Tent Camping: The Carolinas by Johnny Molloy and North Carolina Hiking Trails by Allen de Hart.

You can do anything you want! Go hiking! Go swimming! Read a book! Nap! Whittle! Relax! Breathe!

To be honest, I know camping seems boring to a lot of people and it seems like there isn’t much to do, but the time flies. There is always a trail to explore and a fire to build and enjoy. It’s easy to spend a whole day doing nothing more than that and still feel incredibly fulfilled.

I’m not saying you need to go camping, but even if you think you won’t like it I think you’ll appreciate it so maybe you should try it. Particularly if you haven’t been camping since you were young and/or prefer expensive dinners and fancy hotels on your travels. If you’ve pampered yourself into wimpiness and stubbornness you need it more than you probably know.