Here are the last two years:

Gotta keep on theme with the title, ya know?

In general, 2017 was a pretty good year. That’s a lie. Mentally, it was probably the worst year I’ve ever had and it prompted me to go on medication. But it improved drastically towards the end (and I also went off the meds).

Back in November I got an e-mail from Amex with my favorite place to visit: 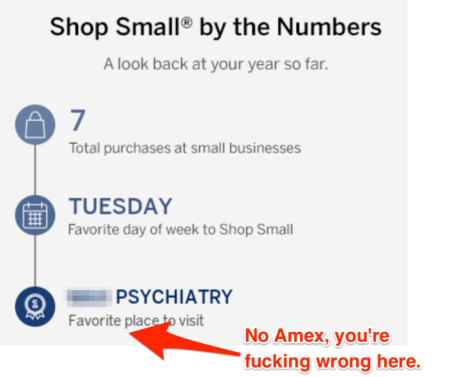 Anyway, how about we don’t dwell on that and move on to the good, huh?

I didn’t read many books this year. Only 20. (Including 2 audio books.) And I also didn’t give anything 5 stars besides The Complete Peanuts Vol 1: 1950-1952. I stand by that rating. Although I’m not sure reading a collection of comic strips counts as reading a book. Personally, I’d disallow it.

The Road by Cormac McCarthy

I had high expectations for The Road because I’ve been hearing about it for years and it is often recommended. Expectations are tough because they can really ruin an artistic experience. I’m happy to say that The Road lived up to the hype. I should probably give it 5 stars, but it’s so sad that I’m not sure I can.

My favorite Christopher Moore book is Lamb, and I have yet to read something by him that I hated. He’s an absurdist and I’m a fan of the absurd. Secondhand Souls doesn’t disappoint, although it’s the 2nd in a series so don’t read it first.

Petty: The Biography by Warren Zanes was phenomenal. I had just really gotten into Tom Petty’s music over the past year. Then he died. Anyway, this book is great.

The Simple Path to Wealth by JL Collins. Mostly stuff I already knew, but haven’t followed over the years like I should have. (Had I, I’d never have to work another day in my life. ha!) It’s well written and I highly recommend it if you need to take hold of your spending and/or investing.

BONUS related to books: The Public Library. The physical building. It’s one of my favorite places to visit and I only really rediscovered libraries in 2016. (Did you know you can rent eBooks on your Kindle via your public library?) We recently moved and I made sure it was within biking/walking distance of the library.

This is not up for debate. Album of the Year goes to …

I See You by The xx

I See You is such a perfect album I don’t want to sully it with my words.

Mi Band 2 – I bought this for my wife because she needs a 100% volume alarm to wake up. Which, of course, wakes me up too early. The Mi Band was $25 from AliExpress and wakes her up via vibration. Maybe literally a sanity saver. Beyond that, my wife actually loves it for running / fitness tracking. The battery lasts about 2 weeks between charges. And do I need to repeat the price? $25!

Amazon Echo – I listed this last year, but it’s still on the list. Love it. We also pay for the $4/month Echo-only Amazon Music Unlimited which is an excellent add-on.

The BOA lacing system – One of the cool things about working at Sumo is that they go on phenomenal company retreats twice per year. In December we went to the Canadian Rockies (Banff / Lake Louise) for 5 nights of hiking/snowboarding/other fun. I hadn’t gone snowboarding in about a dozen years and wow has technology changed. I learned about the BOA system there and I loved it so much that I just bought inline skates with it. I won’t try to explain BOA but I promise you you’ll love it if you’re a skater/skier/snowboarder. BTW, I know it’s straight out of the 80s but my wife and I love inline skating for fitness/fun. We did it a lot in Poland and slacked on buying skates after moving to the US. I’m happy I slacked now, though, because I wouldn’t have known about BOA otherwise. It solves the one frustration I always had with inline skating and snowboarding: putting the boots on and lacing them up! With BOA it takes seconds instead of minutes.

Instant Pot pressure cooker – We have the DUO60. Got it for $68.95 on Amazon’s Black Friday last year, but didn’t use it until about 6 months later. I love it. Particularly in the summer when it’s hot and I don’t want to heat up the house/kitchen. I will say this: instant it is not. Let’s say you’re making something (chili or chana masala are my go to) that takes “15 minutes.” Well, it takes 5-10 minutes to build up pressure first and then you have to wait about 30 before you can actually open the pot because you have to wait for the pressure to release. So it’s not any quicker than doing it on the stovetop. But it doesn’t heat the whole kitchen and it’s all self-contained so it’s hands off. I use it once/week, sometimes more.

Arches National Park – It’s beautiful, but unfortunately part of the park was closed for renovation. Bonus: a few miles from Arches is Canyonlands National Park. While Arches was packed Canyonlands barely had any visitors at all. Too bad, because it’s also really beautiful.

Tip: if you’re gonna visit a few National Parks it’s probably worth it for you to buy an Annual Pass for $80. You can also get a free pass if you’re officially disabled. The pass is particularly nice at the Grand Canyon: you don’t have to wait in the long line to enter the park because Annual Pass holders have their own lane.

Ibanez AW54 Acoustic Guitar – It’s crazy to me that this guitar costs less than $200, including shipping. Twenty-three years ago I bought my first acoustic guitar — a crappy acoustic guitar, I must say — used at a pawn shop for more than I paid for this one (adjusted for inflation). Anyway, I hadn’t had an acoustic for a few years and I missed it, but I’m also not a professional and didn’t need a “dream” guitar like a Martin. I was near choosing an Epiphone, because they have never done me wrong, but after reading lots of reviews went with the Ibanez AW54. I’m glad I did. I did have to adjust the truss rod and file down the bridge because the neck arrived slightly warped (note: this is normal, wood bends!; truss rod adjustment wrench included with the guitar) and the action was too high. These are easy adjustments and actually cheap guitars are great for learning how to fix and maintain guitars because you don’t have to worry so much about causing expensive damage.

There is probably something(s) I missed, but that’ll do for this year I think. If you have anything to say let me know in the comments.

← Rediscovering The Joys Of Tent Camping
Can We Talk About Travel “Hacking” and Airline Miles Valuations? →