Let’s not bury the lede: it’s not travel hacking. It’s “signing up for credit cards to get reward point bonuses for free or discounted airfare and hotels.”

Not as sexy, I know, but it’s reality.

I Didn’t Travel Hack, But Here Are The Credit Card Bonuses I’ve Earned Since June 2017 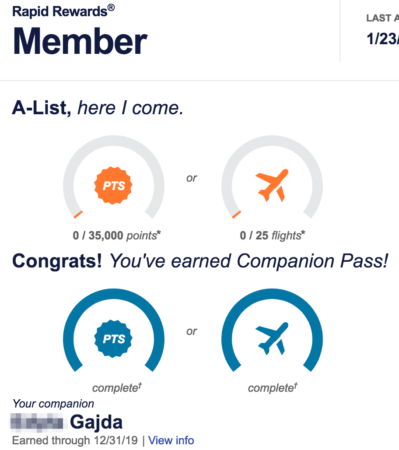 Added after this article was originally posted:

So, I guess, this is the only part of travel “hacking” that’s actually a “hack.” Get all the best Chase cards first, before getting any other provider. Unless, of course, the other provider is giving away an exceptional bonus. Bonuses change regularly so sometimes it’s just luck, being at the right place at the right time.

Onto what this is all really about:

Why Airline and Hotel Miles Valuations Are Miscalculated

If you try to maximize the value of your points you’ll find a lot of well known folks talk about how much 1 point is worth. e.g. Southwest RapidRewards are worth 1.6cpp (cents per point) and Ultimate Rewards are worth 2.1cpp and so on. 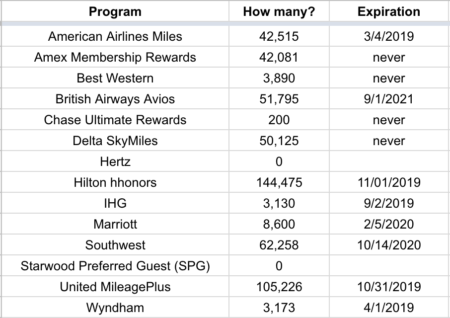 Some of these “travel hacking experts” value points based on irregular scenarios.

But others are not so simple.

Some people who shall remain nameless claim Ultimate Rewards are worth 2.1cpp because you can transfer them to an airline partner and use them for a high value First or Business class ticket that would cost a lot.

The issue with this scenario is you would probably never pay for a First or Business class flight so they’re not actually worth that! In reality, since you usually pay for Economy fares you’ve devalued your points by using double or triple the points to pay for a better fare class.

The popular valuations are based on a sort of straw man. “Well, this First class flight would normally cost me $10k but since I used 120,000 miles I saved $10k and got 12 cents per mile!”

I suggest you maximize utility and not dollar value.

If you normally pay for Economy fares then you actually lose money when you book a Business or First trip with airline miles. Instead of spending 60,000 points on the economy flights you spent double which means you got one less flight out of the scenario that you now somehow have to pay for.

Which of the following scenarios maximizes utility?

The answer is obvious. Two flights have greater utility than one.

Let me be clear here in saying I don’t have a problem using lots of points for a fare class upgrade. I’ve done it! It’s amazing flying in the upper fares internationally. Really, it’s a whole different experience. And I’ll probably do it again in the future. I’m just not going to fool myself into thinking I saved money in the process.

My preference at the moment is to maximize utility. I want to get as many flights as possible and I don’t care if I have the privilege of flying in Economy instead of Business or First while doing so.

As an aside: goodness am I tired of hearing people complain about economy airline seats. I’m 6’5″ and somehow I’ve been alright on hundreds of flights even if sometimes my knees are jammed into the seat in front of me. You’re alright too. You know the worst part about flying economy? It’s not the seats. It’s the whiney adult babies. Anyway …

Interestingly, maximizing utility can be a money loser as well if you’re traveling more than you’d normally travel.

I specifically earned the Southwest Companion Pass so we could be decadent.

But my wife has limited vacation time (hence late Friday flights; she doesn’t miss work) and I want to show her as much of the US as possible. The Southwest Companion Pass plus the 125,000 points I earned (signup bonus + normal spending) helps facilitate this goal. I also have $400 in Southwest gift cards acquired via the Amex Platinum card airline credit so even our flight taxes & fees ($11.20 per roundtrip per person) are paid for.

This is willful decadence. It’s true that these trips will cost us less than if we had to pay cash, but under normal circumstances we would not be going on these trips at all, so the net result is they cost us money. To be fair, we’re in a position that these trips aren’t going to put us in the poor house, but they are extra and pretending otherwise is Trumping the truth.

OK, cool, you’re convinced. Which cards should you get to maximize utility?

Note: For the cards I have I’m able to get referral links so I’ve used them below for those three relevant cards. I get 10,000 points per referral and your points bonus doesn’t change. Thank you for helping our travels!

If you fly domestic and Southwest flies out of your home airport this is a no brainer. Even if you don’t plan on flying extra like we do. The current point bonuses on the personal cards are 40,000 each, meaning after hitting spending requirements to get said bonuses you’ll have over 84,000 points. You need to earn 110,000 points to get the Companion Pass so you’ll need to spend a lot more before you get the pass. (Or wait until they’re offering better sign up bonuses of 50,000+ again.) The other option is to get one of the personal cards and the Southwest business card because that has a 60,000 points bonus and you’ll get the Companion Pass without extra spending. Get all 3 and you’ll have over 140,000 RapidRewards!

Note: You can apply for all three of these cards on the same day. I got approved for the two personal cards after applying within minutes of each other, but I did have to call them so they could verify some things. “Why are you applying for 2 more cards when you already have 2 Chase cards?” My answer: “Your bonuses are crazy good and I like Southwest.” They accepted that!

Next, you’re gonna want some hotels. I think the Chase Sapphire Reserve is great, even though it has a $450 annual fee. That fee includes $300 in travel spending credit (airfare, hotels, highway tolls, Uber/Lyft) so it’s effectively a $150 annual fee. There are also some other benefits that may be useful for you. (If you don’t already have it Global Entry is great and you’ll get it free.) You get 50,000 Ultimate Rewards points worth $750 in travel after spending $4,000 within 90 days.

If I hadn’t gotten the Amex card which put me at 5/24 and ineligible for more Chase cards I would have also gotten the Chase Sapphire Preferred card for 50,000 Ultimate Rewards points after $4,000 spending in 90 days and $0 annual fee for the first year.

When you’re done with that I’d start looking at the other available cards and accompanying bonuses (Amex Platinum and hotel cards). But the above is gonna take you a while so get on it.

Need hotels instead? Get the 150,000 Hilton Ascend bonus here.

The Biggest Drawback of Credit Card Signup Bonuses (for us, anyway)

The biggest issue we have with these cards is we don’t have a lot of expenses so meeting the spending requirements sometimes takes some planning. Spending $4k in 90 days on a new card is difficult for us because we don’t eat out, don’t drink, and don’t regularly spend money on anything but groceries and necessities.

I’ve taken to buying Walmart, gas station, and Hotels.com gift cards (all at a discount through Raise, of course) if I need to meet a spending requirement and I’m coming up short because I know I’ll use all of those sooner or later. If your monthly spending is higher than ours then you won’t have this problem. (Although you might want to save money by buying gift cards through Raise anyway. Their 1 year guarantee is legit.)

I use a few other travel saving tactics — optimal Priceline bidding, easy ~15% savings at Hotels.com (couple it with their 11th night free promo and it’s closer to 25% savings), and others — but since this is already nearly 2,000 words I’ll stop here for now. Another time, okay?

Oh, wait, before I forget because I know people wonder: this all has only a small impact on credit score. It does dip down temporarily for a month or so after every credit card application, but whether using FICO or Vantage 3.0 scoring I’m still in excellent range. That said, if you’re planning on getting a mortgage or other loan soon you should hold off until after you do that before you start applying for lots of credit cards.

Want to keep on top of these opportunities? My favorite places are Doctor of Credit and reddit.com/r/churning.

← Good, Gooder, Goodest – My Favorites of 2017
What I’ve Been Enjoying In Isolation →