My friend Neil and I just hosted the first 48 Hour eBook Challenge so, in this case, a better question is, “could you write an eBook in 48 hours?”

Sometime last year self-publishing superstar JA Konrath posted an 8 Hour eBook Challenge on his blog. While I knew it would be possible for me to write and publish something in 8 hours, I didn’t participate for a myriad reasons, but the idea stayed top of mind. Maybe because I love doing work sprints, which are incredibly taxing, but also incredibly rewarding.

You’ll recall I wrote and published an eBook/audiobook in 96 hours about 2 months ago. That was also inspired by JA Konrath. But I thought I could one-up my own challenge even if I couldn’t quite reach 8 hours.

48 hours sounded good to me. It’s just one weekend. There are a lot worse things I could do in a weekend. And most weekends I don’t accomplish anything of merit at all.

So Neil and I brainstormed how it would work, created a Facebook event a couple weeks in advance of our set date, and invited some folks.

As you can probably guess based on how humans are, although a handful were interested, nobody showed up. Oh well! Neil and I got to work anyway.

In case you want to do your own 48 hour eBook Challenge this is what I learned and what I suggest. Don’t use it as the only way, use it as a guideline.

Write about something you know. 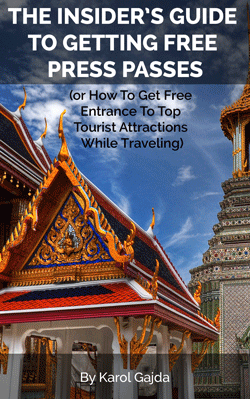 In other words, something that won’t require much research time.

I had three ideas going into Friday night’s first work session. I wanted to write a new book on minimalism, because I’m not happy with The Luxury of Less. I also wanted to write a book on vegan/vegetarian-ism that’s not preachy and not based on pseudoscience. But upon reflection I knew it would take much more than 48 hours to do either of those books justice.

A few hours before we began I finally decided on a topic, how to get free press passes when traveling, which gives you free access to most tourist attractions. It’s something I’ve done only twice, but I’ve also only tried twice and I know it works. That makes me more of an expert than most people on this topic and it’s something that isn’t complex. I could write less than 10,000 words and it would be enough for someone to go out and do it themselves.

Press pass hint: keep your pitch short and to the point — what can you offer? — when e-mailing the tourist board you’re targeting.

Choose a comfortable place to work.

We could have done better on this point. We chose a great “art house” movie theatre that has WiFi, lots of decent food/coffee, and ample space to work. But there was a film festival going on so it was busy and noisy and the WiFi didn’t work most of the weekend (probably because of the thousands of festival-goers).

Get firm commitments from participants.

If I were to do it over I’d have only invited people who were willing to commit to renting a hotel room or office space and paid in advance.

Had we known it would be just Neil and I we might have done the challenge at one of our respective flats. As it was we were looking for a larger place to work and since nobody showed up we didn’t need it. We were thinking too much about their comfort assuming they were humans of their word. We decided to go through with the original plan and stick with the movie theatre anyway. We didn’t plan out anything else and time spent on searching at that point would have been time not spent writing. (We ran into this issue a bit on Saturday evening when we decided the theatre wasn’t working and spent the better part of an hour looking for an alternative.)

I know full well about the terrible human tendency to break commitments and yet it seems to surprise me every time. There’s a lesson in there about not holding other people to my standards, but I digress …

Plan out food and breaks in advance.

If I were to do this again I’d plan the specific foods/restaurants I would eat. Maybe even plan a food delivery schedule in advance. Mostly I ate at the theatre’s bistro, which has a few vegan & vegetarian choices, but one can only eat so many salads and sandwiches. Actually, I didn’t consume enough calories at all and should have eaten more salads and sandwiches. I was too busy writing a book to worry about silly foodstuffs!

I was also bad at taking short breaks. Neil had a 45 minute timer set. But I’d work through for 2-3 hours before standing up and taking a breather. That said, I think for a work sprint of this magnitude that might be a necessity. If I’m tearing through my writing it’s not helpful to stop, get off track, and then try to get back into the flow.

Doing a project like this is exhausting and feeling rested helps. I got about 7 hours of sleep each night, which was OK. Preferably, I would have scheduled a couple 20 minute naps as well.

Focus on what matters.

What matters is your content. Is what you’re writing about good enough to get the point across? Good. You’re not looking to win awards here. This is not a literary competition. This is about writing about something you know and sharing it with the world. Don’t waste time fixing sentences that aren’t perfect. They won’t be perfect. Write!

I spent the first hour or so with pen & paper writing out notes and key points I wanted to cover in the book. Then I fired up Scrivener and copied each main point into a new chapter along with its relevant notes. I’d barely written anything and already had the skeleton of a book!

Note: I highly recommend you use Scrivener for your challenge. If you don’t want to spend the $45 (it’s worth it) just use their 30 day trial. It’ll save you lots of headaches during formatting.

From there I simply started at the introduction and worked my way through each chapter. By the end of the night — 11pm in this case — I had 2,332 words written. My goal for the night had been 1,000 words, but I now realize that 2,000 is a much better goal for the short Friday night session so I’m glad it worked out like that.

Write, write, and write some more on Saturday.

That’s it. Finish all your main writing today. Don’t worry about editing. Write as clearly as you can, of course, but don’t try to be perfect.

You want to get about 5,000 words written during the extended Saturday session for a 2 day total of 7,000 or so. I didn’t hit my 5,000 word goal — more like 4,500 — because I felt I had written enough detail about everything I wanted to cover and I hate adding fluff. After edits my book ended up at about 6,500 words.

Besides editing you have to remember that you’ll need to design a cover (use Canva.com‘s Kindle cover template if you’re not a designer) and format for Kindle (Scrivener makes this easy). That’s why you want to finish writing on Saturday. Spend the first 4-5 hours of your Sunday editing/fixing and set a hard, “OK, I’m done” deadline. Then move on to designing the cover (it won’t be great, that’s OK) and formatting for Kindle.

It’s difficult writing a short eBook in a weekend. Don’t think otherwise. But don’t get discouraged if it’s not coming along well. Take a break when you need to and get back to it. I find setting hard goals helps me, but you do whatever helps you.

Use bits of “non-thinking” time for other tasks.

If you’re having issues writing or if you’re feeling discouraged use that time for other tasks like the cover design and the Kindle formatting. I started my cover design on Saturday when I had a brief period of, “I think this is all I have to say on this topic, but it doesn’t feel quite done yet.” I didn’t get far into designing the cover before I had more thoughts to write.

The Goal Is To Ship

If you’re not happy with your book after publishing it you can make it better at a later date. Though I recommend taking some time off from the topic and letting your thoughts percolate before doing that.

Want To Write Your Own eBook In 48 Hours?

When you’re done post in the comments about how it went and what you learned and I’ll send you a copy of my own 48 hour ebook.