There was a time I was afraid of flying RyanAir. I’d heard so many bad stories about being charged ridiculous fees for extra weight or having to check a bag for some reason that I’d been turned off by them.

Then last year, after I’d been in Europe for over 2 years, I actually tried them out myself. 1) Because they were over 50% cheaper than the nearest competitor for the flight I needed. and 2) Because I started reading about their CEO, Michael O’Leary. He is a marketing mastermind and has made the airline immensely profitable.

You know what I learned when I finally gave them a shot?

If you hate RyanAir it’s probably your fault.

Like all airlines, RyanAir has rules. Being that they’re a no frills very low cost airline they have some more rules than normal. Like if you don’t check in online and print your boarding pass yourself you’re going to have a bad time at the airport.

Anyway, I’ve been doing a lot of traveling the past few months. Austria, Slovakia, Hungary, the US. After a few weeks in the US I came back to Poland in January. But a short while later my girlfriend was going away to Zurich on business and I didn’t want to sit around not traveling. So I started looking at cheap flights out of Wrocław under the guise of, “how many new countries can I visit?”

I’m not usually one to collect countries. Before I started traveling a little over 5 years ago, at age 28, I’d only been to 5. Poland, US, Canada, Mexico, and Germany.

I haven’t been to all that many since then, considering. Twenty six total (I revisited all the countries I’d already been to), twenty one new countries since September 1, 2009. I don’t have a goal to visit every country in the world, and there are dozens that I definitely don’t want to visit. So the number isn’t important. My only real lifelong travel goal is to spend at least 2 weeks in a new country every year. Last year that was Japan for 2 weeks and Hungary for 6 weeks. This year I’m not sure what it’ll be.

That all said, even if the number isn’t the goal it’s still lots of fun to visit new countries.

And since I’m not independently wealthy RyanAir is the best way to do that while already in Europe. The only transport that’s cheaper is hitchhiking.

There are actually two low cost carriers that fly out of Wrocław. WizzAir and RyanAir. I’ve flown WizzAir before and they’re fine, but RyanAir is a lot better because

a) RyanAir is cheaper.

b) RyanAir allows one normal carryon and one small bag (purse, shopping bag, or computer bag). WizzAir only allows one small carryon. Have a normal sized carryon (like my 36L backpack)? WizzAir charges extra. Have a carryon plus a small bag? You gotta check one with WizzAir. I usually travel with a backpack and a computer bag although I only took the backpack on this trip.

c) RyanAir’s seats don’t recline so the short entitled person in front of me won’t break my knees 20 minutes into a flight. I wish every airline did this. Being too tall is usually great, but almost never when traveling. (Actually, I don’t think WizzAir seats recline either, but now I don’t remember.)

Note to you: When you fly don’t recline your seat. It makes you an asshole, putting your negligible extra comfort over the certain discomfort of the person behind you. My knees quite literally touch the back of the chair in front of me and I don’t recline. Suck it up. Even if the person in front of you has reclined their seat.

The cheapest first flight to a new country I could find was a RyanAir flight to Bologna, Italy. To be completely honest with you, I’m not sure I’d ever heard of Bologna, Italy. But I’d never been to Italy. And the flight was exactly $20.02.

A veritable no brainer.

Now, of course there are other transportation costs involved when visiting a city. The shuttle bus from Bologna airport into the city centre was 6EUR. I took a taxi on the way back due to weather and that was 15EUR. So I paid more for airport transportation than the flight in.

Unfortunately, Bologna was disappointing. The 3 days I was there it was in the midst of snow, rain, and ice storms. They don’t have very good civic services and the walkways weren’t cleared. So to explore the city I’d have no choice but to slip and slide my way around ice and puddles while getting my (only pair of) shoes and socks soaked through. There’s only so much of that one can take before not wanting to take it anymore.

I did my best to not hate it, but I spent a lot of time in my hotel room letting my shoes dry and reading The Goldfinch (great book, deserving of all its accolades). That said, it’s a city I think I would like in the Summer. The people I met were nice, the Italian language sounds amazing even though I don’t understand it, and it looks like it could be a fun city. 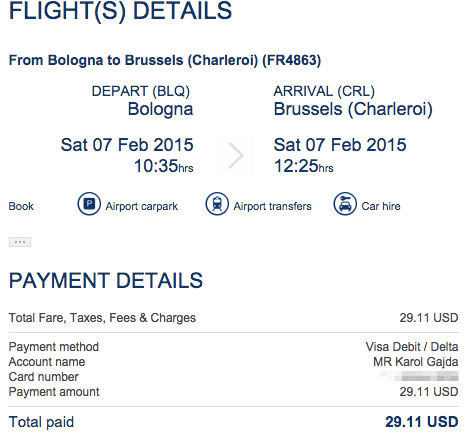 RyanAir flies into Charleroi airport, which is pretty far from Brussels and isn’t the main Brussels airport. The shuttle bus takes an hour and costs 17EUR. Roundtrip is 31EUR. So the shuttle bus cost more than the flight into town. That’s twice already that I spent more on airport transport than flights.

I was only in Brussels for 2 nights, but I enjoyed it. The mim, Music Instrument Museum, was a highlight for me. And although I didn’t drink a Belgian beer in Belgium (actually, I didn’t drink alcohol for the whole trip) I did have Belgian fries. They tasted exactly like they do everywhere else in the world.

Next up, Athens, Greece! 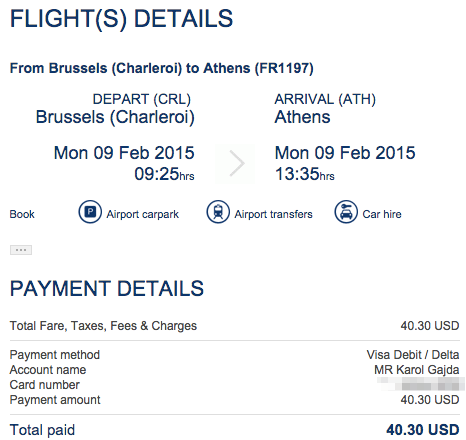 I like ancient ruins as much as the next guy so I was particularly excited to visit Athens.

Damn, these flights are getting expensive now. 40 bucks?! Just kidding.

And anyway, Athens makes up for it by being a relatively low cost city. Especially as far as touristy capital cities that are on the Euro are concerned.

A 72 hour metro pass which included one airport roundtrip was just 20EUR. Perfect for my 68 hours in the city.

And for 12 EUR I got a pass to visit 6 ancient ruin sites, including Akropoli.

You might be asking yourself why I didn’t take the time to get press passes and save some money on this trip. Well, there was no time to do that since this was all planned just days before leaving. It’s not difficult to get press passes, but it does take time to send e-mails and to communicate with tourist boards. More info about how to do that here.

Athens was my favorite of the cities I visited on this trip. It can be a bit grungy, but it’s also modern. It’s the type of tourist city I like. Not too big, not too many people, good food, nice things to see, lots of history, and not expensive. And they have coconut crack sticks sold on the streets which I implore you to eat if you ever pass through or see them elsewhere.

Last up, Rome, Italy! I guess this technically messes up the “new country” premise since I had already visited Italy on this trip. But I needed to get back to Wrocław somehow and that somehow was through Rome. 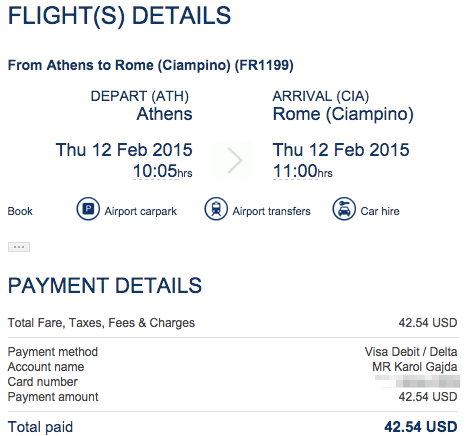 If I’m being honest, although I wanted to visit Rome, I wasn’t all that excited about it. I had a feeling it would be an overpopulated annoyingly-overrun-with-touts city and that was precisely the case. I didn’t hate it, but it’s not the type of place I need to visit again.

I would have rather spent 2 nights there, but I spent 3 nights in Rome because there were no earlier direct flights back to Wrocław. One “downfall” of RyanAir is that they don’t fly their routes every day. (Meaning: Don’t miss your flight or you’re screwed!)

Note: Don’t stay at the Hotel Central Lodge. It has very good ratings (8.5) on Booking.com for some reason. Good location, but it’s gross. I had to change rooms because my first room smelled like raw sewage. And my second room did too. Yuck. The staff were nice, but it’s not a pleasant place.

The first thing I did after arriving was visit the Column of Marcus Aurelius! (I asked the hotel’s receptionist where that was located, and she’d never heard of him/it.)

I didn’t do all that much else in Rome. It’s obviously got quite a few tourist attractions, but I enjoyed them from the outside. The Vatican City line looked like it was about a kilometer and many hours long, though I wouldn’t give money to the Roman Catholic Church to enter anyway. I did want to see what kind of spectacle they had going though. The line for the Colosseum looked to be at least an hour long and I didn’t feel a need to go inside there either. Though if it was Summer and warmer I would have. Mostly I walked for hours and hours every day, explored, ate food, and drank coffee.

An interesting thing about Rome Ciampino airport transport. There are buses that cost 4-6EUR and the taxi’s have a set fare of 30EUR. I heard that most taxi drivers don’t abide by this and overcharge tourists. I was ill, wanted to sleep in Sunday morning, and I didn’t want to bother with those taxis. The Uber fare estimate was 34EUR so I figured that was worth an hour of extra sleep (saved by not having to go to the bus station for an 8:30am bus). It ended up only costing 26EUR. I thought I had some free credit (I do), but it only works in the US. Anyway, I’m quickly becoming an Uber convert. (If you’ve never used them and want $20 to try them out, click here.) 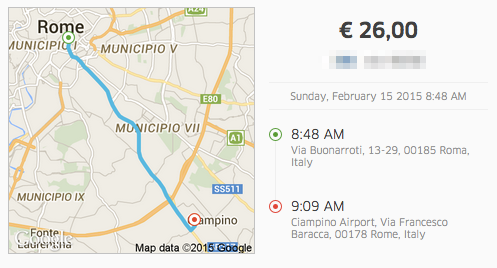 My flight back to Wrocław concluded my whirlwind 3-new-countries adventure.

All told, my 5 RyanAir flights cost just $173.39. Oh, and since I’m exceptionally tall (1.96m) the flight attendants on every flight put me in the Emergency Exit row, which costs extra if you book in advance. I really can’t say enough nice things about them. You’d think I was being paid for this, but no. Though I’m open to it. Hello, RyanAir?

The total trip cost including accommodation, food, and everything else was $1,100.18. About $100 per day. Not cheap, but I would’ve only saved about $200 staying in hostel dorms and I prefer solitude. Sometimes the hostel dorm prices were barely cheaper than the hotel prices. I would’ve also saved about $40 if I didn’t take the taxi in Bologna and the Uber in Rome. And then I would’ve saved maybe another $100 if I’d eaten cheaper meals. Most of my meals weren’t more than $10, but some were more expensive. Vegan restaurants aren’t known for being cost friendly, but I’m cool with supporting them. So, the bare bottom base cost of this trip could be about $700 and I added some luxuries.

Interestingly, I’m not actually a big fan of traveling like this. I much prefer to pick a place and hang out there for an extended period of time. Not only is that cheaper, but running around nonstop wears me out physically and mentally.

And that said, I think I’m leaving Wrocław tomorrow to explore a bit more of Poland. ;)

← My Favorite Podcasts: 2014 Edition
The Biggest Problem With Alternative Medicine →