“The thing about the absolute truth is, it’s not pretty, and not everyone is interested in it. But it’s still the truth.” – Mike Skinner 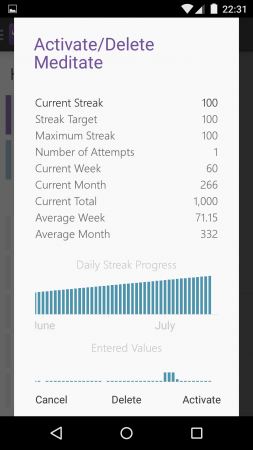 On Saturday I finished up a streak of 100 days of mindfulness meditation. Thank you, I’m impressed too. It’s rare I do anything for 100 days straight, except maybe eat. But even that I forget about some days. As it is, my history with meditation has been long and full of failure.

I bought my first book on meditation when I was 18 and attempted to get into the habit for the next 16 years. It never lasted more than about a month.

After reading 10% Happier and listening to Waking Up I decided to challenge myself to meditate for 100 days for an average of 10 minutes per day. I started with just 5 minutes per day to make it easier.

I wanted to do it consistently to the best of my abilities, but I had no expectations. Although I guess I probably did hope it would help with all the general things it has been reported to help with or I’d not have bothered. I mean 1,000 minutes is nearly 17 hours. That’s 2 seasons of Cheers!

The (Incomplete, Flawed) Research On The Benefits of Meditation

There is a lot of research regarding the supposed benefits of meditation, but if you learn even just the basics of how to read a scientific paper you quickly learn which research to pay attention to (not a whole lot really) and which research needs more research (most of it).

I’m not going to dissect every research paper on meditation because I have important things to do like catch up on all that Cheers I missed out on, but let’s dissect just one, for education’s sake.

I’ve often heard that regular meditation creates actual physical changes in the brain’s gray matter, making it more dense. That would be incredible! (Although I’m already pretty dense as it is so maybe I shouldn’t get so excited.)

But let’s hold on a second and take a look at the study in question.

According to the abstract — red flag! most bloggers and journalists only read and report on abstracts and that’s no good — what they did was take 16 healthy individuals who wanted to take an 8 week Mindfulness Based Stress Reduction (MBSR) course. They measured these individuals before and after the program using voxel-based morphometry. (I don’t know what that is either, but that’s actually not important in determining if the study is done well.) They also measured a control group of 17 individuals.

Hopefully you see another red flag.

A total sample size of 33 individuals is, for statistical intents and purposes, nothing. You’ll be happy to know the researchers were up front about this if you read the full paper instead of just the abstract. See, most scientists mostly have an interest in truth. Journalists and bloggers (and podcasters and authors and TV presenters) have an interest in increasing their audiences and bank accounts, even if it means lying. Intentional or not. Ignorance is not a good excuse.

Beyond sample size, if you read the paper you also learn that two people dropped out of the study after one week.

“Due to discomforts during the first MRI scanning session, two participants did not return for the second session.”

That’s not a big deal in this particular case, because they’re not trying to hide the drop out rate, but drop out rates can matter a lot. It’s an easy way for a researcher to massage the results and make them more positive, but that’s a whole other essay. (Google “p hacking” if you’re interested.)

Additionally, this group of subjects was self-selected. And they got a discount on the MBSR course to participate in the study. A group of subjects that is self-selected is usually not as good as a group of randomly selected individuals although for a study using MRI I don’t think it’s as big a problem. Somebody who understands and works with MRI would be better equipped to speak to this.

If this is confusing or convoluted you now see why if you care about your health it’s your duty to go beyond the headlines when you hear news that says anything to the effect of “Science confirms …” or “Science says …” or “backed by science!” It’s usually not an absolute even if it’s reported as such by your favorite A-list bloggers, journalists, or authors.

Happily, and I think you’ll find this often, in the Discussion section of the paper the researchers here are up front about the faults of their study:

“It should be noted also that MBSR is a multifaceted group program and some positive effects may result from components not specific to meditation or mindfulness, such as group social interaction, stress education, or gentle stretching exercises.”

This is why I love science.

These researchers are so honest THEY DON’T EVEN TRUST THEIR OWN STUDY!

That doesn’t make for a good headline on Buzzfeed or HuffPo or [insert most bloggers who report on science] so it’s up to you to read the often confusing research papers before making a decision based on a well written or well marketed article.

You might be thinking, “OK, Karol, so maybe meditation increasing gray matter density is inconclusive, but I’ve heard it works for depression and other psychological issues. What about that?”

There is no doubt lots of research to this effect. One of the best ways to look at it is through a meta-analysis, which is an analysis of the analysis. In other words, researchers don’t take just one study, but they take all the studies that fit their criteria and come to a conclusion based on a bigger sample size.

Anything like this with regards to meditation? Glad you asked. Yes, yes there is: Mindfulness-based stress reduction and health benefits. A meta-analysis

I do have the full paper, but it’s not necessary in this case because fortunately, the abstract is telling (emphasis mine): “Although derived from a relatively small number of studies, these results suggest that MBSR may help a broad range of individuals to cope with their clinical and nonclinical problems.”

Although not ideal you can sometimes use an abstract to dismiss a paper. You can almost never use the same abstract to determine if the paper should be accepted as fact.

Relatively small? Suggest? May help? Pardon me if I say that’s not convincing. It’s like the first time Sam tells Diane, “I love you,” because Diane bought him tickets to the big fight. You think maybe it is true and it does seem true, but even Sam’s not convinced. But hey, now we’re going a little off the rails, aren’t we?

“It’s good to stay true to your own vision. Even, or maybe especially, when that vision is that you know your life is going substantially off the rails, and you’re determined to try to present that situation in an honest way.” – Mike Skinner

That quote has absolutely nothing to do with meditation, Cheers, or scientific research, but it sure does have the phrase “off the rails” in it and that’s good enough for me.

Have I lost you yet? No? Ehh, win some lose some.

Well, before we get to that, lately:

Now, insomnia is nothing new for me and I’m not blaming meditation for any of this. It very well could be due to life changes. I got married — my wife actually joined me in meditation for most of my last 50 days — and our future is held up in annoying bureaucracy. That hasn’t been easy for me to deal with because although I’m okay dealing with change I’m not good at dealing with being forced into things. Top that off with all of the uncertainty (6 more months until we can move? 12 months? Longer? I don’t care how long it takes anymore, but I’d like to know.) and I’m enjoying Poland less as I feel more trapped here.

Again, I am not blaming meditation for these issues.

Yesterday, the first full day after my meditation streak ended, was one of my most relaxed feeling days in weeks. I actually think I may have been starting to get a sort of meditation anxiety and it was a relief to know I wouldn’t be meditating at any point in the day.

Before you think I’m being unreasonable, much like the research dissected above cannot be taken as a definitive positive statement on the benefits of meditation, you also cannot take my anecdotes as a blanket statement that meditation is useless. It has been useless for me. Sample size of Karol Gajda.

If it comes out that there is definitive research that meditation is beneficial even when it doesn’t seem like it then I will consider doing it again. Until that time, well, after 16 years of fits and starts I can finally say I gave it a good shot and it’s time to move on to not giving meditation much thought. (Is that a pun? I can’t tell. My sleep deprived brain is broken.) It also leaves more time for Cheers. I’m happier already.

If you are interested in meditation there are a few things I learned about it during my 1,000 minutes sitting in silence.

Contrary to what it might seem I didn’t hate meditating and I didn’t decide I was going to stop until last week when I looked more closely at the research. Even though I wasn’t getting anything out of meditating I was committed to keep doing it if the science was in its favor. Alas, that’s not the case.

If nothing else, it was interesting to learn …

An aside: Think god gave you free will? Sit in silence and don’t let your thoughts wander for 10 minutes. If you can’t control your own thoughts, what else can’t you control?

If after some time meditation isn’t doing anything for you then quit. No regrets. Maybe you, like me, are one of the many people meditation doesn’t help and that 10-20 minutes per day could be better used reading a book or engaging in myriad other activities. (*ahem* Cheers)

I would like to end on a positive note, because that feels nice, you know? So, on the positive side I’d always planned on doing a 10 day Vipassana meditation retreat at some point and this experience has saved 10 whole days of my life from that torture. Huzzah!

Do you meditate? What has been your experience?

Update: Lots of great comments (here and on Reddit) and e-mails about meditation and science journalism over the past 24 hours. I’ve run into some doxastic openness and, unfortunately, some intense doxastic closure as well. But that was to be expected. In general, I’ve been feeling great since stopping the meditation. But I’m also more open to trying it again at some point in the future. Longer sessions, but without the “must do it daily” requirement. And maybe with a teacher in the beginning. For now? I’ll stick to other activities.